In the Night Garden 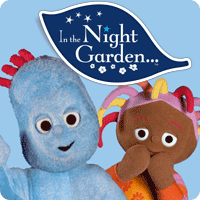 Iggle piggle, Upsy Daisy, Makka Pakka and more colourful characters and toys play together and take children on wonderful adventures in a magical picture-book place that exists between waking and sleeping in a child’s imagination, with calming music and nursery rhymes, broadcast on the BBC children's television series. Explore the magical world of toys, games, dinnerware and merchandise from the garden at Funstra.

per page
Set Descending Direction
About In the Night Garden
The live action children's television series, produced by Ragdoll Productions has entertained children since 2007, with over 100 episodes, and aims to sooth and relax children and prepare them for bedtime. The garden is a magical place that exists between waking and sleeping in a child’s imagination and it's loveable characters living in a magical forest care for each other unconditionally. Starring the energetic and curious teddy, Igglepiggle, who carries a comforting red blanket, the happy and optimistic dolly, Upsy Daisy, and Makka Pakka who lives in a cave and rides around the garden on his Og-Pog, along with the Tombliboos - Unn, Ooo and Eee, the Pontipines, the Wottingers, the Haahoos, the Ninky Nonk train, the Pinky Ponk airship and the Tittifers birds that relax and entertain young children.
Meet the Cast of Characters

Igglepiggle is the star of the show and is a blue teddy bear-like doll with red hair that carries a red blanket, offering him comfort. Igglepiggle is curious and energetic and loves jumping and bouncing around on his adventures and his best friend is Upsy Daisy. In each episode, Igglepiggle arrives on a boat and leaves at the end of each episode on a boat, and his red blanket acts as a sail.

Upsy Daisy is a happy and optimistic dolly that has the appearance of a rag doll with red, yellow, pink, and orange hair and wears a matching dress. Upsy Daisy loves to skip and dance through the garden and tries to convince her friends to join in. When Upsy Daisy is excited or surprised, her hair stands on end and when she dances, her skirt transforms into a tutu. She loves to sing in her megaphone, much to the displeasure of her friends. "Daisy Doo!"

Makka Pakka is a small, beige, round shaped doll that lives in a cave on the edge of the garden and loves cleaning things. Makka Pakka loves to collect and wash little stones and enjoys washing the faces of the other characters in the garden. Makka Pakka travels around the garden on his Og-Pog trolley, always carrying his soap, a sponge and his uff-uff dryer, along with his special trumpet. "Mikka makka moo!"

Unn is one of three of the Tombliboos and wears a costume of red and green, stripes and spots and is a boy Tombliboo. Unn lives with Ooo and Eee within the branches of a bush, where they enjoy stacking and sorting special blocks and making music on their piano and drums.

Ooo is one of three of the Tombliboos and wears a costume of brown and pink, stripes and spots and is a boy Tombliboo. Ooo lives with Unn and Eee within the branches of a bush, where they enjoy making music on their piano and drums, and playing with large blocks.

Eee is one of three of the Tombliboos and wears a costume of pink and yellow, stripes and spots and is a girl Tombliboo and a little smaller than Unn and Ooo. Eee lives with Unn and Ooo within the branches of a bush, where they enjoy stacking and sorting special blocks and making music on their piano and drums.

The Pontipines are a large family of ten tiny creatures that consist of a mother and a father, and eight children - four boys and four girls. The Pontipines live in a semi-detached house at the foot of a tree and live next door to The Wottingers. The Pontipines have a similar appearance to peg dolls and wear red costumes with blue trimmings.

The Wottingers are a large family of ten tiny creatures that consist of a mother and a father, and eight children - four boys and four girls. The Wottingers live in a semi-detached house at the foot of a tree and live next door to The Pontipines. The Wottingers have a similar appearance to peg dolls and wear blue costumes with red trimmings.

The Haahoos are five giant inflatable pillow-like creatures that leisurely roam around the garden. They are shaped as a flower, a cross, a star, a circle and a pear shape and are covered in vibrant colours and patterns. The Haahhos are sedate and gentle and leisurely roam around the garden, but are so big that they can stop the Ninky Nonk in its tracks.

The Pinky Ponk is an airship with waving fins and small propellers that gracefully transports characters around the forest, offering wonderful aerial views of the garden. During a Pinky Ponk journey, passengers are able to drink Pinky Ponk juice that is dispensed in sippy cups.

The Tittifers are brightly coloured, tropical birds with their own unique songs. They consist of four small blue birds, three larger pink birds, two big green birds and one multicoloured toucan. They sing individually throughout the show, and sing together towards the end of an episode, as a signal that it's time to sleep. 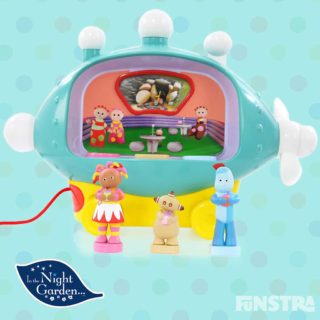 The In the Night Garden Musical Activity Pinky Ponk blimp with figures allows little ones to explore songs, stories, counting and fun with sounds and lights, and moving pictures with this fun playset. 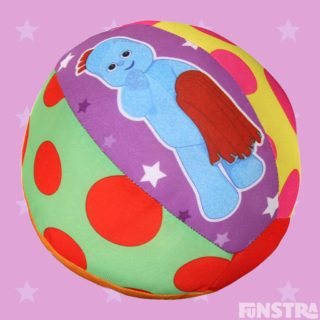 Bring the In the Night Garden TV series to life with this fun In the Night Garden Interactive Motion Sensor Ball, featuring Igglepiggle, Upsy Daisy and Makka Pakka fun sounds and phrases that help improve your child's dexterity and stimulate senses. The soft feel motion sensor ball enhances physical development and improves dexterity and stimulate the senses. Throw, bounce or catch the ball to hear sounds and phrases from the show with this fun interactive toy. 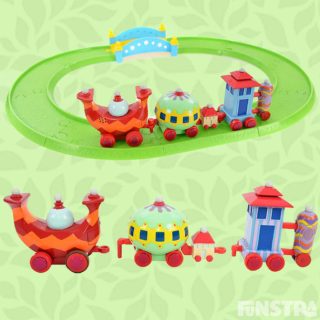 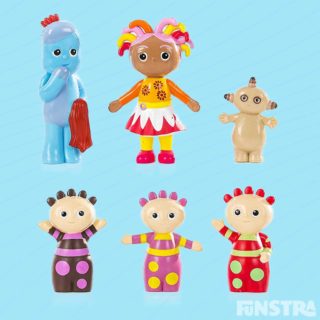 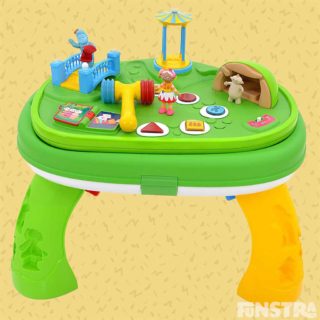 Explore and learn with Iggle Piggle, Upsy Daisy and Makka Pakka and this fun activity table educational toy that features the iconic bridge, carousel, gazebo and cave playset from the show, with figurines to learn with colours, lights, games, songs and stories. 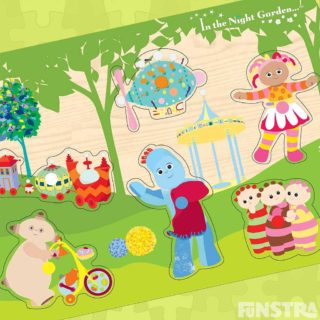 Toddlers can play and learn with a In the Night Garden jigsaw puzzle feature peg wooden puzzle pieces of Igglepiggle, Upsy Daisy, Makka Pakka riding his Og-Pog bike, the Tombliboos, the Ninky Nonk train and Pinky Ponk plane on a wooden frame tray. 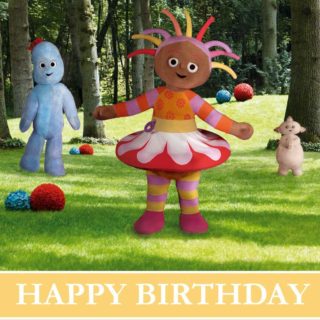 Happy Birthday from Igglepiggle, Makka Pakka and Upsy Daisy! Why not celebrate your little one's birthday with an In the Night Garden theme party? Get birthday party, cake, decorations and craft activity ideas from Pinterest. 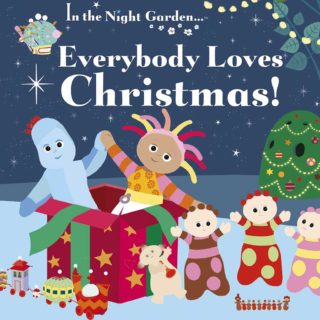 In the night garden... everybody loves Christmas! Surprise your little one and give a gift from the night garden with Igglepiggle, Makka Pakka, Upsy Daisy and the Tombliboos. 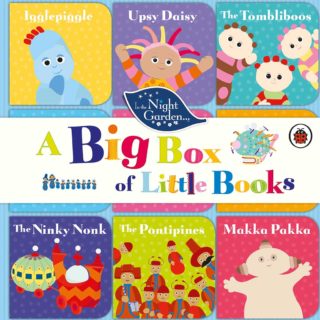 A Big Box of Little Books features stories of all your favourite characters from the night garden in nine little board books with Igglepiggle, Upsy Daisy, The Tombliboos, The Ninky Nonk, The Pontipines and Makka Pakka. Read aloud with children to help enhance cognitive behavior, stimulate creativity and develop language, concentration, comprehension and literacy skills. 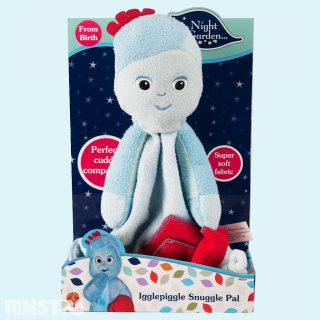 The In the Night Garden Iggle Piggle Snuggle Pal Comforter Blanket with super soft fabric for baby is the perfect cuddle companion to comfort your little one. Collect them all with Makka Pakka Snuggle Pal and Upsy Daisy Snuggle Pal. Collect the DVD's - Out for a Walk, Best Friends, Ombliboo Tombliboo, Hello Upsy Daisy, All Aboard, Where is Makka Pakka?, Look at that, Pinky Ponk Adventure and All Together! 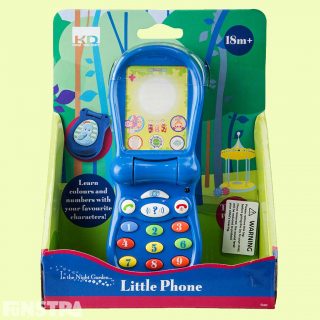 Learn numbers and colors with your favorite characters on this fun In the Night Garden Electronic Interactive Toy Little Phone. 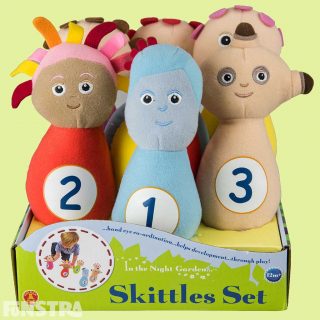 Play a classic game of skittles with Iggle Piggle, Makka Pakka, Upsy Daisy, the Tombliboos and a soft rattle ball with this In the Night Garden Skittles Set. 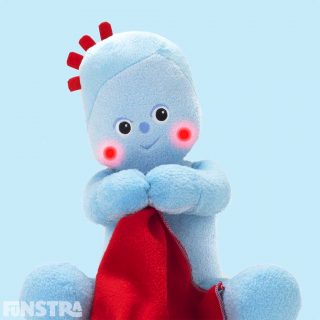 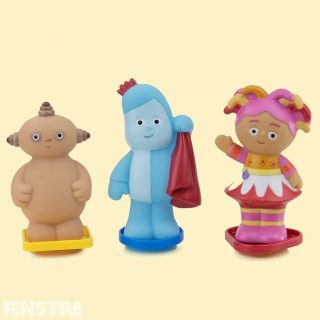